Azure Functions, the future of SaaS

Recently, I have had the chance to use Azure Functions as candidate for the design and development of a service, which will be delivered as Software as a Service (SaaS). Azure Functions is a relatively recent technology, and as a consequence, I have realized many people didn’t heard of it yet. For this reason, I would like to write this post as a brief introduction and my personal experience using it at the present.

What is Azure Functions?

Azure Functions provide a framework to build and manage easily serverless oriented architectures. The idea behind Azure Functions  is that you have a piece of code, which provides a functionality. In order to execute your piece of code, Azure functions introduce the concept of “trigger”. A trigger can be an HTTP request, a timer, a message in a queue, a modification on a Blog, etc. In addition, Azure Functions provides the concept of “bindings” Binding to a function is a way of declaratively connecting another resource to the function; bindings may be connected as input bindings, output bindings, or both. Data from bindings is provided to the function as parameters. Here you can see the triggers&bindings supported by Azure functions at this moment: https://docs.microsoft.com/en-us/azure/azure-functions/functions-triggers-bindings

Azure Functions offers build-in runtime scaling and you will pay only for the request you have and the resources you need in your functions. This business model makes specially interesting Azure Functions when you want to deploy your business logic without caring about the infrastructure. (More info here: https://docs.microsoft.com/en-us/azure/azure-functions/functions-scale)

Version 2.x is in preview. It leverages .NET Core and supports cross-platform development on Windows, macOS, and Linux machines. 2.x adds first-class support for Java but doesn’t yet directly support any of the experimental languages. Version 2.x uses a new binding extensibility model that enables third-party extensions to the platform, independent versioning of bindings, and a more streamlined execution environment.

In my last approach, I have used version 2, as I wanted to get all the benefits introduced by dotnet core.

One of the key features of Azure Function is the flexibility to turn your code into functionality. For this reason, you can write your function directly on Azure and it will be available without care about deployment, infrastructure, etc.

To do so, go to your azure account and create a new Azure App. Then, choose In-portal.

You will be able to select several triggers. For this example, we will use Webhook + Api:

Now, the only thing left to do is write your code. For this example, I will implement sum function, so the sum of two parameters will be returned as a result.

From the same Azure screen, you can test your function and we see the result obtained is as we expected.

Creating functions from Azure portal can be handy, but it might not be the best choice to develop complex functions, where you want to use a code repository, automatic testing, CI/CD pipelines, etc. For real scenarios, you should use Visual Studio to develop your Azure Functions. However, it is as easier as creating them on Azure Portal. 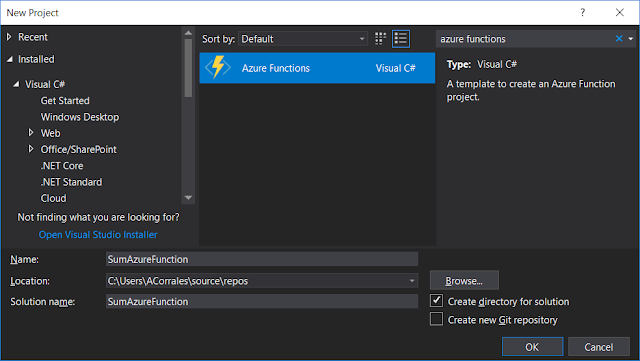 Then, you will be able to select version, triggers, storage and access rights. For this example I will use Http trigger with version 2 (.net core) 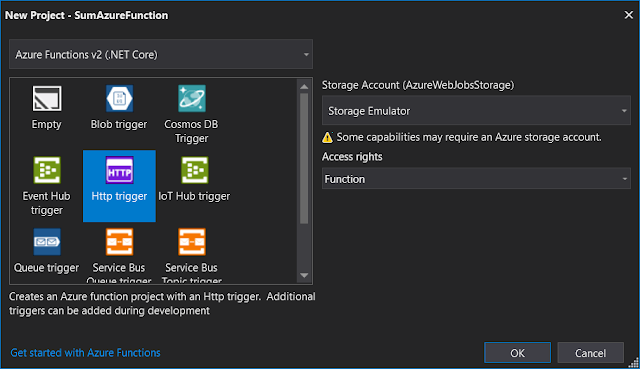 Now all you have to do is writing your code, since the first time you execute it, Azure functions Tools will be installed automatically.  If you execute your function on a browser you will see something like this:

Once you start developing your Azure Functions as Azure Http triggers, you might want to add OpenApi definition for your clients and Dependency Injection to keep decoupled the implementation of your functions. And here is when you will realize Azure Functions might be not as mature as asp.net core, as it doesn’t include this functionality out-of-the-box.

Fortunately, you will be able to find some temporary solutions until Azure Functions version 2 include it.

Here you can see all the source code to use those NuGet packages with Azure Functions on my GitHub repo:

After configuring OpenApi and DI NuGet packages, you can see the example of this post running with Swagger going to the url http://localhost:7071/api/swagger/ui

However, from my point of view, this is a workaround and there are some disadvantages if we compare with dotnet core: 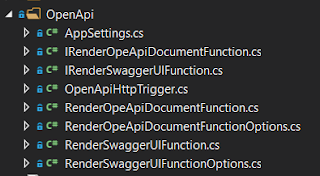 Azure Functions is a really promising technology and it might the future of SaaS and WebApi development. This is reason why all the competitors have their own implementation of the same concept. Some of them are: Azure functions, AWS lambdas, IBM OpenWhisk, Iron.io, Google Cloud functions, etc.

In spite of the fact that Azure Functions might seem an Azure technology, it supports Docker, so you can containerize your azure functions and deliver them as a container to other cloud technology or even to on-premise environments. The possibilities of Azure Functions are endless.

However, as we analyzed in this article, Azure Functions version 2 is still in preview version and there are some missing features, such as OpenApi or DI. In spite of the fact that there are some NuGet packages to provide this functionality, those are workarounds and the implementation has some lacks, if we compare with dotnet core.

For this reasons, until Azure Functions includes the missing functionality, I would suggest to use asp.net core to develop your Web Apis in the meantime. But keep an eye on Azure Functions, as it is very promising technology and it will be soon the future of SaaS.

If you want to learn more about Azure Functions, I recommend you the following material:

Azure functions is open source, so you can have a look at the source code:

Introduction When you are writing tests, the name of the test is very important because the person who is executing the test should be able to detect what was fine or wrong at a glance. For this r...

Probably you already knew this trick to run apps in Windows 10 as Administrator. If not, I hope this tip can help you. Sometimes, you need to execute Visual Studio as Administrator always, for exa...

Use Visual Studio extension to distribute your Code Snippets

Introduction In a previous post we saw how you can build code snippets to write tests faster empowering your team to follow good practices. https://www.albertocorrales.com/2018/10/writing-unit-tes...