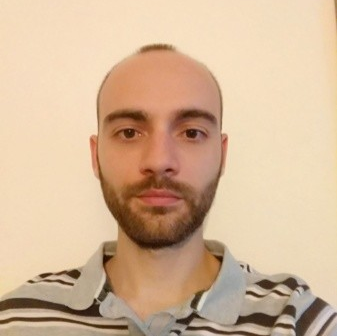 When you are working in a software project, one of the most important aspects is your branching strategy. If you are using GIT (and if don’t, probably you should consider it), there are several strategies, such as Gitflow, Github flow and Gitlab flow, etc.

In this article, I will try to introduce them and analyse pros and cons for each one. Spoiler alert, there are advantages and disadvantages for all of them, so taking that into account, you should consider which one fits better for your project and team.

First of all, in order to understand why we need a particular branching strategy, we need to have clear which is the relationships between versioning, environments and software life-cycle.

Normally, in software development, we can find three environments, where we will be deploying our versions for different purposes. These can be more than three, but lets focus on the basic pipeline. I will call those environments “Dev”, “Test” and “Production” (although there are other conventions like “Dev”, “Staging” and “Stable”).

Dev is the environment for development. If we are using CI/CD, each commit should be automatically deployed here. Normally, in Dev environment we can deploy and test functionally that we are currently developing for next version.

Test environment is used when we have a particular version, which we are planning to release. In test environment, we should execute more intensive testing and fix the issues we find to make this release stable for production. In Test environment QA’s will have a very relevant role. This environment is also known as Pre-Production, Release, QA, etc.

Production environment is the environment that our final users will see and use. For this reason, if we find a bug in this environment and it is really critical for our users, we should hotfix that bug to sort it out as soon as possible.

So all versions that we deliver follow the flow Dev -> Test -> Production. 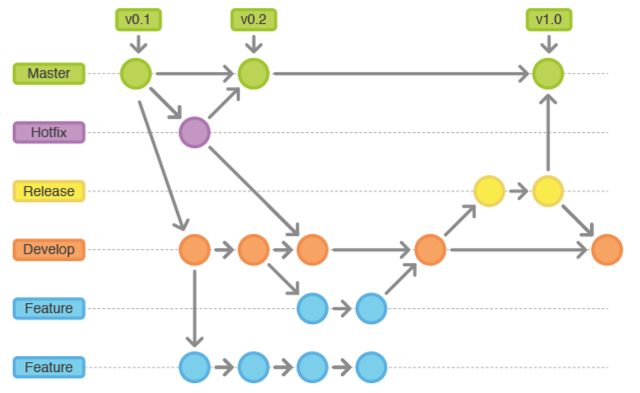 Gitflow is the most known branching strategy, which tries to cover all the scenarios that we can find during our software life-cycle.

In Gitflow there are two branches with infinite lifetime:

And there are also some temporary branches.

Github flow is a simplified flow, which only two kind of branches: 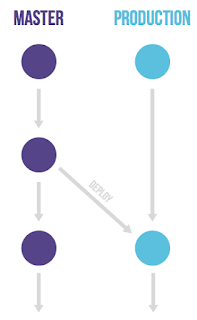 Environment branches with GitLab flow: this flow proposes to have an infinite life-time branch per environment. 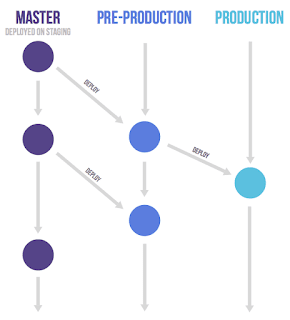 Now that you know the most relevant git branching strategy, you might know which is the one that fits for your project.

Based on my personal experience, simple approaches like Github flow or Gitlab flow are cool for open source projects or when there is not a third party client. However, I think in those approaches there are gaps and more risk involved when it comes to enterprise projects. Even when you have a decent set of automatic testing, for enterprise projects we normally have a QA stage in order to ensure that the new release that you are delivering to your clients is stable.

In addition, if you are not in charge of delivering timelines or you have several production clients, the concept of CI/CD per each PR will be problematic as you cannot decide what you want to deliver and when you are going to deliver a new version.

Finally, your clients might require a hotfix for the current production version, but they don’t want any new functionality. For this scenario, Gitflow is the only one which can support this by definition.

From OpenAPI to source code with CI/CD

Introduction In the era of Microservices, you are probably designing or consuming one or more Web Services. As a result, you might be aware of the importance of having a good definition of your ...

Infrastructure as Code with Pulumi, AWS and Azure DevOps

Introduction I still remember when I had to ask IT to have a new server. After that, I had to wait and pray for having the server with the corresponding permissions, software, etc. That is tha...

Benefits of using TypeScript in your project